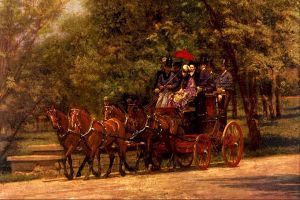 In the first ever ‘Snippets’ article on Windows into History, Lovely View, Shame About the Corpse I included a quote from the first volume of The Autobiography of a Stage-Coachman, by Thomas Cross, published in three volumes by Hurst and Blackett in 1861, and I promised to return to the same series of books in a future Snippet.  It has taken a while (there are so many interesting ‘forgotten’ books to explore!) but the following quote is taken from the second volume of the same work, and describes an incident of drunk driving on the part of the writer.

Flattered at having made a favourable impression, I failed to perceive that the good old port, of which the host was by no means sparing, was likely to make an impression on me. Wishing, as I supposed, to mark the favour I had done him by partaking of his hospitality, and knowing my time was limited, he finished the entertainment with two bottles of excellent claret. He requested me not to hurry myself, as he had ordered his gig, and would himself drive me to Redbourn, a distance of little more than a mile. Nothing loth, I followed his suggestion, and swallowed glass after glass with considerable gusto.

Taking my leave of the fair lady, and my friend the steward, I stepped into the gig that was at the door; soon became conscious that I had over-stepped the bounds of prudence. I was, nevertheless, in full possession of my senses, and in no fear of not keeping my equilibrium.

Arriving at the inn, I found the coach there, the horses put to, and the passengers seated — the proprietor, who resided there, looking very serious; and the coachman who had brought the coach up standing by his side, with a significant smile.

Without saying a word, except wishing my entertainer good evening, I took hold of the reins, mounted without any difficulty, and drove off, determined, as I thought, to be doubly particular and careful. As usual, I pulled up at St. Albans for a minute or two. I did not get off the box; indeed, I was afraid to trust myself, for I began to feel more and more the effects of the quantity, as well as the quality, of the wine I had taken. However, we proceeded very steadily and very well to the top of Ridge Hill; from thence, the worst part of the stage being over, the horses were accustomed to go the last four miles at a more rapid pace — consequentiy I put them on a little faster, and, passing through the turnpike-gate at Mimms, they being all very fresh, I fancied they would like a gallop; so after leaving the village, going down the little descent that opens on to the Wash, I, as the term is, “sprung ’em.”

I was perhaps in the middle of the road, and the fence on my off-side being very high, I did not observe the Manchester “Cobourg” coming round the corner, at about eight or nine miles an hour — I going about double that pace. Just before we got to the turn, we met: my leaders flew out of the road at the instant, over a small ditch on to a bank, where was a lodge with a white gate leading to a residence then occupied by the Duke of Leeds. The carriage-road extended from the lodge into the turnpike, and was marked by two white posts. Inside the first my horses passed, but the sudden jerk in crossing the ditch threw me off, and I lay on my back in the road, and, for a moment, saw the coach falling on me; but in that same moment the body of the coach struck the post, and the hind wheel having spanned the ditch, she, as the sailor would say, righted; and, with the force from the speed they were going at, broke down the other post, regained the road in safety, and were stopped just as they reached the little bridge over the Wash : — a most miraculous escape for me. The passengers, who sat still, were unhurt; but one gentleman, in jumping off the hind part of the coach, sprained his ankle, and, sore with pain and fright, he insisted upon being conveyed to London in a post-chaise. One or two of the others accompanied him — at which I could not help observing, that there is generally one troublesome customer among the passengers when anything occurs, and he is always sure to be a member of the legal profession. As it was, I thought myself well off by paying for the post-chaise, and the injury done to the off-leader of the Manchester coach — my roller bolt having lacerated his shoulder to such an extent as to render him useless.

Altogether, this gross indiscretion on my part cost me 20 pounds — an inconsiderable sum compared to what might have happened, but enough to purchase a resolution never to throw a chance away again. I assure my readers that, in my long career, it was never repeated.

As I have mentioned in previous articles, it is very difficult to convert an amount of money to today’s value, but it is safe to say that twenty pounds at the time was well over £1000 in today’s terms.  It was not illegal to be drunk in charge of a coach and horses in Britain until 1872.

Coming soon on Windows into History: a series of Christmas History articles.  There is not quite enough time before the end of this month to cover another travel journal in sufficient depth, so there will instead be a few more ‘snippet’ articles for the rest of November.  If you would like to be kept informed of new posts on Windows into History, please click the ‘follow’ button on the right of the screen.

Co-writer on junkyard.blog. Author of windowsintohistory.wordpress.com. Editor of frontiersmenhistorian.info
View all posts by Roger Pocock →
This entry was posted in 19th Century, Books, History, Snippets, Travel. Bookmark the permalink.

2 Responses to Drunk Driving in the 19th Century (Snippets 43)