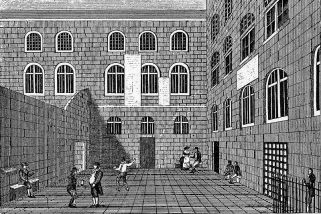 Snippets 146. In the late 18th Century a familiar family nicknamed “Newgate, Cripplegate, Billingsgate and Hellgate” were notorious among the aristrocracy. Richard Barry, 7th Earl of Barrymore, was known as Hellgate, and lived a short and wild life, dying at the age of 23. Newgate was his brother Augustus, named after reputedly the only prison he hadn’t been inside, Cripplegate was his club-footed brother Henry, and Billingsgate was his potty-mouthed sister Caroline. His enthusiasm for the theatre made him a colourful subject for Thomas Munden’s biography of his father, well-known actor Joseph Shepherd Munden. The following quote is taken from Memoirs of Joseph Shepherd Munden.

The man in this society, who was most talked of at the time, was Lord Barrymore. He was one of a motley trio known by the nicknames of Newgate, Cripplegate and Hellgate. His Lordship was the first; his successor, the next lord, who was lame,— the second; and the Honorable Augustus Barry, a clergyman, the third. The latter gentleman passed much of his time in prisons for debt. The two noblemen were both addicted to gambling; with this difference, that the first played to lose, and the second to win, and they both, by their several ways, succeeded in the attempt. The habit of extravagance was early fostered in Lord Barrymore. It is asserted that his grandmother, who doted on him, gave him when he went to Harrow a thousand pounds, just as a good-natured old woman would slip a crown piece into her darling’s hands at parting. The freaks that this nobleman played have not been equalled in our days, so prolific in lordly riots; but it will always be the case, when young men of rank come early into the possession of their vast estates without control: the usurer supplies them at first with the ready means of folly, and when the rents are collected, there is no want of hangers-on; the very excesses they commit enable those scoundrels to take them unawares and secure their plunder.

Among the ingenious expedients which Lord Barrymore invented to ruin himself was,— drawing straws from a truss with the Prince of Wales; the holder of the longest straw to receive £1000. He gave a sumptuous entertainment at Ranelagh, to which it is said only himself and two other persons came – drove a tandem along the cliffs at Brighton close to the declivity: it was one of those high tandems, which Sir John Lade brought into vogue, and from which Lady Lade used to step into the first floor window. At the theatre in that town he played Harlequin, and jumped through a hoop. He was a very good comic actor, as may be seen from the representation of him in Bell’s Theatre, in Scrub, with Captain Wathen in Archer; and, with all his wildness, at bottom a man of sense and education. In a company, where more than one literary man was present, it was proposed that each person should write an epigram, upon a given subject, within a very limited space of time, and Lord B. was the only one who accomplished it. He built a theatre at his seat at Wargrave, where he played, with other amateurs, and occasional professional assistance. The whole audience were afterwards entertained at supper. His end was an untimely one. In stepping into his curricle to convey, as commanding officer of the militia in the district, some French prisoners from one depot to another, he accidentally trod upon the lock of his carbine, and the contents lodged in his brain. He had not been many years of age, but he had contrived to dissipate an enormous fortune.