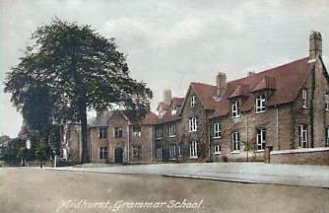 Richard Cobden (1804-1865) was a successful businessman, trading in muslin and calico. In 1828 he became co-owner of a calico printing factory in Manchester. His travels in the course of his business life convinced him of the importance of free trade, and he is probably most remembered for his support of the Anti Corn Law League. In 1841 he became MP for Stockport in the Sir Robert Peel government. A man of strong moral beliefs, he finally lost his seat in parliament in 1857 due to his opposition of the British attack on Canton in the Second Opium War. A couple of years later he was returned to Parliament once again, and spent the next few years as a foreign diplomat, instrumental in the important Cobden-Chevalier Treaty with France

Cobden was born in a farmhouse in Heyshott, near Midhurst, and always retained strong ties to the Midhurst area. Although he spent his final years in his apartments in London, travelling to Algeria for the winters to avoid the damp British weather, he made a final posthumous return to his spiritual home to be buried at West Lavington Church. An obelisk in his memory can be found in West Lavington, inscribed:

According to the Manchester Courier and Lancashire General Advertiser, Cobden had been keen to find a way to restore the Grammar School at Midhurst, which had fallen into disrepair. The following quote is from the 17th May 1865 edition:

An inhabitant of Midhurst, writing to the Star, suggests as an appropriate memorial to the late Richard Cobden the repair and reinstatement of the Midhurst Grammar School. He says, “The school, which once enjoyed a high reputation, has now fallen into decay. The endowment of this school is nominal. There is a demand for a good middle-class school for that neighbourhood. There is a good site, a fine school-room out of repair, and a master’s house in ruins. Attempts have been made to reinstate a good school in Midhurst. Richard Cobden was among the promoters of these efforts, but the place itself and the neighbourhood are, comparatively speaking, poor. £1000 or £1,500 are wanted to establish the old school.”

It is difficult to estimate the relative value of the sum of money required in today’s terms, as there are so many ways of calculating that, but it is probably safe to say that the sum required was at least equivalent to £100,000 today. Midhurst Grammar School had been closed since 1859, but was eventually restored and reopened in 1880.