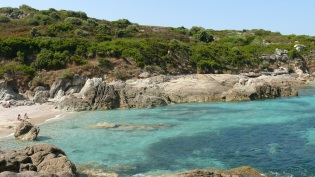 Corsica, the island where Seneca was exiled by Claudius (photo by Mauro Cavallo, from Wikimedia Commons)

Seneca the Younger (c. 4BC – 65AD) had strong opinions about how to achieve happiness, and he wrote about them in De Vita Beata (“About a Happy Life”).  Being a stoic, a lot of his advice concerns stability in life rather than transient pleasures, and the theme of his fifth book (don’t worry, the “books” are just big paragraphs) is very much about not getting distracted by physical pleasure.  The following is my own translation, with the original text rendered into a style of English that is easily readable, unlike a lot of academic translations of Latin.  Please see below for further explanation of this project, and some more information about Seneca himself.

Now that I have allowed myself the freedom to define happiness, a man is happy who, thanks to logic, has ceased to either hope or fear. But rocks also do not feel fear or sadness, and nor do cattle, yet nobody would call them happy, because they cannot understand what happiness means. You can put into the same category as them the men whose dull nature and lack of self-knowledge reduces them to the level of cattle, mere animals. There is no difference between the one or the other, because animals have no logic, while those men have only a corrupted form of it, crooked, cunning and damaging to themselves.

Nobody can be happy if they are beyond the understanding of truth. Consequently, a happy life is unchangeable, and is founded upon true and reliable wisdom. The mind is uncontaminated and free from all evils only when it is able to escape not just from life’s wounds, but also life’s little scratches. Then it will always be able to stand its ground, defending even against the angry onslaught of bad fortune.

As for physical pleasures, they may surround us on all sides and use every means of attack, trying to win over the mind with their charms and using every possible strategy to distract our minds, completely or in part. But what mortal who retains any traces of humanity would want to be tempted day and night, and devote himself to bodily pleasures, neglecting his mind?

I’ll leave readers of this blog to answer Seneca’s question themselves, but personally I think having the strength of mind to escape “life’s scratches” as well as “life’s wounds” is a stunningly clever point from Seneca.  Sometimes it can be the little things in life that prey on the mind the most.

Seneca was a philosopher, a dramatist, a satirist, a senator and a tutor and advisor to Nero.  He was also a vegetarian for a grand total of one year, until his father persuaded him to abandon the “foreign” practice.  After his retirement he was accused (probably falsely) of being involved in an attempt to assassinate Nero, and was forced to commit suicide, which he did with calm dignity and stoicism (or so the story goes – history is rarely told in an unbiased manner), after attending to his final letters.

We will look at some more of Seneca’s advice about how to achieve happiness next time.

An explanation of this project:

Roman writing can have a reputation for being a rather dry subject for those who never had their enthusiasm sparked by Latin, and I would lay the fault with that firmly at the door of the translations. Rome was a vibrant, exciting society and that was reflected in their writing, but I remember when studying Latin finding the obsession in academia with accurately translating everything word for word frustrating. I can see the necessity for that approach from an academic point of view, but if the end result is a piece of hackneyed, stuffy prose, then you have actually produced something that is a million miles away from the original, despite including all the right words. For the general reader, I think Latin needs to be translated a little more loosely: get the meaning across without copying every aspect of the sentence structure. So I am attempting more modern translations.  For these Seneca translations I will be working with the original Latin text and with reference where necessary to a standard translation by Aubrey Stewart from 1900.

Let’s look at what Seneca wrote, but with the translation tidied up into a much more natural form of English. Let’s render the work back to a natural prose, the manner in which it would originally have been enjoyed. I’m not going to take any huge liberties with the original material, just give it a bit of a spruce up.  Let’s see what Seneca really had to say.

Corsica, the island where Seneca was exiled by Claudius (photo by Mauro Cavallo, from Wikimedia Commons)