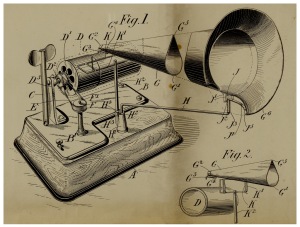 Snippets 186.  An early publication concerning audio technology was The Talking Machine News, a monthly magazine for “users and makers of talking machines”; in other words, phonographs, or what we would now term “record players”.  By 1904, technology was marching on at a rate that might surprise a modern reader, and in the February issue the magazine reported on a use of phonographs that was revolutionary at the time, but is now familiar as simple audio dictation:

Government by phonograph is the latest phase of the evolution of the talking machine. True it is in a relatively unimportant government department, but from what small beginnings great occasions rise. We shall hear of Mr. Chamberlain transacting the business of “the Empire upon which the sun never sets” upon the talking machine all in good time. At present we have Mr. Graham Murray, the new Secretary for Scotland, who makes an even greater use of the phonograph for the conduct of his correspondence than he did when Lord Advocate. Some five or six dozen records are now constantly in use by him, and on to these he dictates replies to letters, together with a mass of other detail work. These are then forwarded to London, if he happens to be in Scotland, and the contents taken down by his secretaries in Whitehall. This done, the records are scraped off, and the cylinders are again ready for use. By keeping a phonograph both in London and Scotland he is able to give viva voce instructions to his department in a permanently recorded form—if necessary at a distance of some hundreds of miles.

In the same issue there is a report of another revolutionary use of the technology, again familiar to us today but viewed with scepticism at the time: audio evidence in court.

Our excellent contemporary the Tatler suggests that evidence might well be given in a court of law by talking machine. The Tatler’s suggestion sprang from the fact that a collier named Matthews was, the other day, at Aberavon, fined five shillings for drunkeness, on the sole evidence of a wire sent by him to the magistrate admitting his culpability. We do not wish to discourage the Tatler—or anyone else—in speculations of so engaging a character, but we are bound to point out that many magistrates would consider that what the phonograph said “was not evidence.” At any rate it would have to be attested and verified before it would “go down” in any well-regulated court. And though—even with all this preliminary trouble and expense—this might prove a boon to the motorist, about to be fined for furious driving, and anxious not to lose the time and opportunity for repeating the offence, the process would be likely to prove too costly for those not born with a silver spoon in their mouths.