A Bumpy Ride in Knob Land 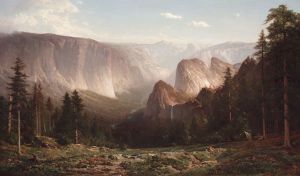 Quick Quotes 28.  This month we are looking at some entertaining quotes from A Thousand Mile Walk to the Gulf, by John Muir.  Muir (1838-1914) was a celebrated naturalist known as “John of the Mountains”, a key figure in the push for the establishment of National Parks in the USA.  The following quote is taken from the 1916 edition edited by William Frederic Bade.  Muir describes travelling through some small hills, sparsely covered with soil, which rain washes down to more fertile plains, an area known as “knob land”.  Passing through these hills, Muir was greeted with an amusing sight:

Traveled in the wake of three poor but merry mountaineers an old woman, a young woman, and a young man who sat, leaned, and lay in the box of a shackly wagon that seemed to be held together by spiritualism, and was kept in agitation by a very large and a very small mule. In going down hill the looseness of the harness and the joints of the wagon allowed the mules to back nearly out of sight beneath the box, and the three who occupied it were slid against the front boards in a heap over the mules ears. Before they could unravel their limbs from this unmannerly and impolite disorder, a new ridge in the road frequently tilted them with a swish and a bump against the back boards in a mixing that was still more grotesque.

I expected to see man, women, and mules mingled in piebald ruin at the bottom of some rocky hollow, but they seemed to have full confidence in the back board and front board of the wagon-box. So they continued to slide comfortably up and down, from end to end, in slippery obedience to the law of gravitation, as the grades demanded. Where the jolting was moderate, they engaged in conversation on love, marriage, and camp-meeting, according to the custom of the country. The old lady, through all the vicissitudes of the transportation, held a bouquet of French marigolds.

“Quick Quotes” are some bonus content for the blog. Each time I find an interesting or amusing little quote that does not really need any further explanation or background information, it will appear on Windows into History under this heading. You can keep updated each time I post a new entry by clicking on the follow button on the right of the screen. I welcome any comments or suggestions, and will consider guest posts.

1 Response to A Bumpy Ride in Knob Land