Tenniel’s “pool of tears” illustration. This part of the book is probably inspired by an incident where Dodgson and the Liddell sisters got caught in the rain on a boating excursion.

Windows into History… in Wonderland 4.

We have a connecting theme this month: Lewis Carroll (Rev. Charles Dodgson) and Alice’s Adventures in Wonderland.  Dodgson was not generally keen on foreign travel, preferring to spend his summers at Eastbourne or on the Isle of Wight, but in 1867 he did travel abroad on a tour of Europe with his friend Rev. Henry Liddon, with his ultimate goal to explore Russia, a country that fascinated him.  The following quote is taken from The Life and Letters of Lewis Carroll, written by Dodgon’s nephew Stuart Dodgson Collingwood and published in 1898, which contains some quotes from Dodgon’s own journal of the trip:

During the whole of this tour Mr. Dodgson kept a diary, more with the idea that it would help him afterwards to remember what he had seen than with any notion of publication. However, in later years it did occur to him that others might be interested in his impressions and experiences, though he never actually took any steps towards putting them before the public.

“The pen refuses to describe the sufferings of some of the passengers during our smooth trip of ninety minutes: my own sensations were those of extreme surprise, and a little indignation, at there being no other sensations — it was not for that I paid my money…

“We landed at Calais in the usual swarm of friendly natives, offering services and advice of all kinds; to all such remarks I returned one simple answer, ‘Non!’ It was probably not strictly applicable in all cases, but it answered the purpose of getting rid of them; one by one they left me, echoing the ‘Non!’ in various tones, but all expressive of disgust.” 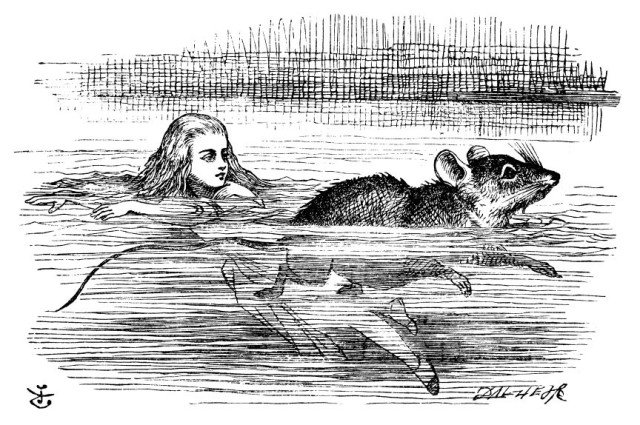 Tenniel’s “pool of tears” illustration. This part of the book is probably inspired by an incident where Dodgson and the Liddell sisters got caught in the rain on a boating excursion.