Windows into Japan 8.  All this month we have been looking at some quotes from travel writers who visited Japan during the latter half of the 19th Century, after isolationism came to an end.  The following quote is from Japan and its Art, by Marcus B Huish, published in 1889, in which the writer describes a typical Japanese house:

The Japanese house principally differs from that of other nations in its want of substantiality. It is fixed to no foundations, for it merely rests upon unhewn stones placed at intervals beneath it, and it usually consists of a panel-work of wood either unpainted or painted black on the exterior face; sometimes it is of plaster, but this is the exception. Its roof is either shingled, tiled, or thatched with hay (haya). No chimneys break its skyline, for fires are seldom used. Where they are, their smoke issues from a hole left at the top of the angle of the gable. The worst side of the house is usually turned towards the street, the artistic towards the garden. The houses, as a rule, evidence the fact that the nation is poor, and that the Japanese does not launch out beyond his means, or what he can reinstate when it is destroyed, as it most probably will be during his lifetime, by fire or earthquake. Two at least of the sides of the house have no permanent walls, and the same applies to almost every partition in the interior. These are merely screens fitting into grooves, which admit of easy and frequent removal. Those on the exterior, which are called shoji, are generally covered with white paper, so as to allow the light to penetrate; the shadows thrown upon these, when the light is inside, find many a place in the pages of the caricaturists. 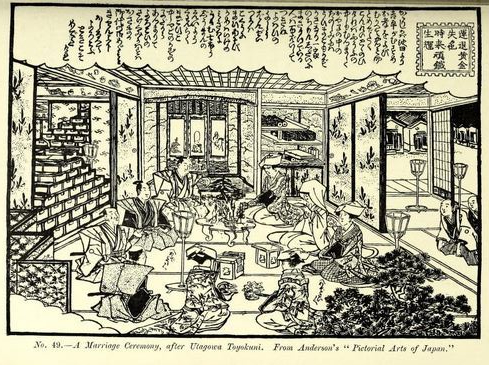 An illustration of a marriage ceremony taking place in a traditional Japanese home, taken from “Japan and its Art” by Marcus B Huish, 1889.

If you enjoyed this blog post, please consider sharing on Facebook or Twitter, to help other people find and enjoy Windows into History. You can keep updated each time I post a new entry by clicking on the follow button on the right of the screen. I welcome any comments or suggestions, and will consider guest posts.

Author of windowsintohistory.wordpress.com Co-writer on junkyard.blog Editor of frontiersmenhistorian.info
View all posts by Roger Pocock →
This entry was posted in 19th Century, Books, History, Japan, Travel and tagged Marcus B Huish. Bookmark the permalink.

2 Responses to The Japanese Home