Music of the Dead 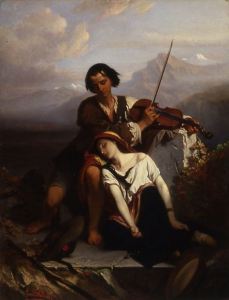 Creepy History 62.  Happy Halloween, and welcome to another October of “creepy histories” on Windows into History.  The following quote is from Strange Pages from Family Papers by T. F. Thistleton-Dyer, published in 1895:

But, in modern days, one of the most unnatural tragedies on record was the murder of Sir John Goodere, Foote’s maternal uncle, by his brother Captain Goodere, a naval officer. In the year 1740, the two brothers dined at a friend’s house near Bristol. For a long time they had been on bad terms, owing to certain money transactions, but at the dinner table a reconciliation was, to all appearance, made between them. But it was a most terrible piece of underhand treachery, for on leaving that dinner table, Sir John was waylaid on his return home by some men from his brother’s vessel – acting by his brother’s authority – carried on board, and deliberately strangled; Captain Goodere not only unconcernedly looking on, but actually furnishing the rope with which this fearful crime was committed. One of the strangest parts of this terrible tale, Foote used to relate, was the fact that on the night the murder was committed he arrived at his father’s house in Truro, and was kept awake for some time by the softest and sweetest strains of music he had ever heard. At first he fancied it might be a serenade got up by some of the family to welcome him home, but not being able to discover any trace of the musicians, he came to the conclusion that he was deceived by his own imagination. Shortly afterwards, however, he learnt that the murder had been committed at the same hour of the same night as he had been haunted by the mysterious sounds. In after days, he often spoke of this curious occurrence, regarding it as a supernatural warning, a conviction which he retained till his death.

If you found this interesting, please consider sharing on Facebook or Twitter, to help other people find and enjoy Windows into History. You can keep updated each time I post a new entry by clicking on the follow button on the right of the screen. I welcome any comments or suggestions, and will consider guest posts.