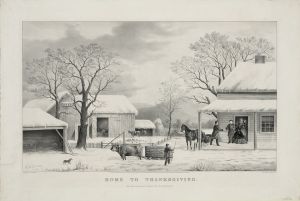 Christmas History 41.  The following alarming tale is taken from an article about Christmas in Canada in the Lincolnshire Chronicle, Christmas Eve 1869.  Just a warning: I have removed a racial profanity, but the article is still reflective of the attitudes of the time, which some readers may find distressing.

It is doubtful whether in any of the principal towns an incident could occur like the following, narrated to me an old Canadian as having happened in his father’s house. There was a time when the Indian element gave a tone to Canadian life. Wild and savage tribes, driven out by the Americans, threw themselves on the protection of the English…

The remnant of a tribe of these wandered into the part of the country in which my friend’s father’s house was situated, and one night at Christmas time presented themselves, and asked leave to use the shelter of a ruinous outhouse. Their request was granted; they were fed and refreshed by the terrible “firewater” which had decimated the tribe, and in return they offered to amuse the guests assembled with one of their native dances. This was gladly accepted for the novelty of the thing. All were disposed to be pleased except a young Englishman – Harker by name, I think – who loudly stigmatised the intruders as “n******” and “vermin,” and protested that if they performed, it should not be in the presence of Marie, the young lady to whom he was paying his addresses. But Marie, who belonged to a good French family, had a will of her own and a curiosity of her own: she had made up her mind to see the Indians, and the Indians she would see. In a word, Harker had to give way, and did so with the worst possible grace.

The exhibition was strange and ghastly. The half-naked bodies of the Indians were striped and dotted with paint, red, blue, and white… But the most startling appearance of all was presented by one Indian, who, with the eye of a hawk, and the face of a lynx, was so emaciated that it seemed as if his body was that of a mummy, covered with a tight brownish parchment…

A war-whoop and fierce dance of triumph completed the exhibition. Its singular vividness, and the dramatic force of the actors in it, drew forth peals of applause from all save Harker, whose jealous heart was stung by the slight Marie had put upon him by the assertion of her own will in opposition to his. He did not applaud; no word of praise fell from his lips; and while the rest clapped their hands, his hung motionless by his side. He stood apart some distance from Marie; but so that he could command every expression of her face, and overhear every syllable that might fall from her lips. While watching thus, a trifling incident aroused his jealous wrath. The emaciated Indian, whose whim it was to personate a living skeleton, overjoyed at the applause given, and one or two substantial marks of approval following it, was moved to express his gratitude in very natural way. Bowing his head to Marie, close to whom he was standing, he took her fair hand in his swarthy fingers, and raised it to his lips. At that instant, the welt of whip-thong across his face caused him to stagger back with howl of pain. “Beast!” he heard Harker exclaiming, “how dare you pollute that lady with your touch?” Half-blinded by the whip, the poor wretch nevertheless fixed on the man who addressed him a look of diabolical malignity, and with a yell fiercer than the war-whoop he had before uttered, would have fallen upon him, and no doubt done him some mortal injury. But he was restrained. The guests interfered: attempts were made to appease the Indians, who at length consented to retire to the shed in which they were privileged to pass the night. With their disappearance quiet was restored, and the incident was regarded as an unfortunate one; but not as anything of sufficient importance to give rise to the slightest alarm or uneasiness. Nor did it; the party was kept till a late hour, and when it broke up, the startling interruption which might have brought it to a tragic close was almost forgotten.

The host, an old Canadian, was, however, well acquainted with the revengeful character of the Indians, and he had some misgivings to what might result. Early in the morning, therefore, he went himself to see in what temper they might happen to be.

To his surprise the shed he had placed at their disposal was empty. They were gone.

Yes; gone. No one knew at what hour they had stolen away; whether in the dark night, or in the fresh glimmer of dawn. It was ascertained that they were not loitering in the neighbourhood. This abrupt departure was ominous; still, as nothing seemed to come of it, no one regarded the circumstance with apprehension. Not even Harker. Certainly not Marie, who was as gay and joyous, and full of life and vivacity as ever; fuller, in fact, for Harker had made her name a day on which they were to be married, and this prospect filled her heart with happiness.

The day named was the eighth of May.

In the night of the seventh of May, the expectant bride disappeared from her father’s house.

And she was seen no more. Never again, in life or in death, did those who loved behold her; but that the Indians were concerned in her abduction no one entertained a doubt. This was their revenge.

If you enjoyed this blog post please consider sharing on Facebook or Twitter, to help other people find and enjoy Windows into History. You can keep updated each time I post a new entry by clicking on the follow button on the right of the screen. I welcome any comments or suggestions, and will consider guest posts.