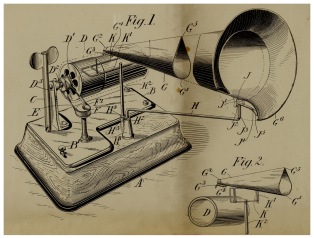 Snippets 175.  In a previous snippet we looked at a quote from the November 1903 issue of The Talking Machine News, a monthly magazine for “users and makers of talking machines”; in other words, phonographs, or what we would now term “record players”.  The following quote is from the December 1903 issue.

The fragility of the ordinary lead-soap record would, one would think, form a serious drawback to its exportation. Even warning notices on the packages are sometimes thrown away, as a passage in a consular report shows. Noticing a case marked “Don’t Drop” being roughly handled on the quay, the consul pointed out that the contents were fragile. “Don’t Drop,” said one of the men; “Ah, yes, we frequently get acid or lemon drops, but I don’t know what kind of drops ‘don’t drops’ would be.” If this story came from any other source it might be suspected, but a consul, like Caesar’s wife, is above suspicion. And really, if you come to think of the illiteracy at home, let alone abroad, there is nothing improbable about it. There can be no question that a good plan in packing fragile goods for exportation, is to stencil “a counterfeit presentment” of the thing exported outside the case. But though that serves very well where champagne or wine glasses are concerned, would it be equally effectual in the case of records? Possibly not. A Kanaka dock labourer would probably not know a record “at sight.” In that case, the safest way out is probably to cultivate the trade in indestructible records, at any rate for export.

Since its invention in 1877 by Thomas Edison, the phonograph had become popular amongst those who could afford the machines, and sales were increasing all the time.  But when a new technology becomes popular, an older technology can be the casualty of that success.  There has been much talk in recent years of tablet and computer use harming book sales, downloads harming DVD sales, etc.  So was there a casualty of the increasing sales of phonographs at the beginning of the 20th Century?  You won’t guess it. Read on.

A contemporary suggests that the talking machine has injured the sale of the miniature billiard table. It may be so; but we always regarded these lilliputian tables as a plaything rather than as a pastime for grownup folk. At any rate, there can be no comparison between billiards “as she is played” in miniature, and billiards proper. Nor, we would add, do we think that any comparison can be instituted between toy billiards —as we prefer to call it—and the entertainment afforded by even a tolerably decent type of talking machine. Those irritating little balls, so out of proportion to the size of the cues, and that irritatingly low cushion over which the balls will persist in jumping! However, every one to his or her taste—as the old woman said when she kissed the cow.

By the way, such alleged interferences are common enough. We remember when the bicycle came in it was said that it had seriously injured the sale of walking sticks—and tobacco. We do not know whether there are any statistics available as to the sale of walking sticks, but at least we never heard, and do not believe, that the imports of tobacco leaf for the purpose of manufacture fell off when the bicycle was introduced. As a matter of fact, we believe the imports have steadily increased year by year any time these last twenty years. Now, neither walking sticks, bicycles, nor tobacco are “in our way.”