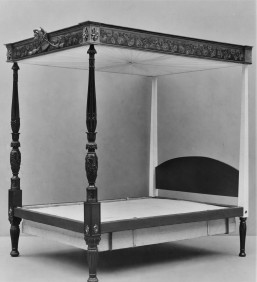 Creepy History 52.  Today’s tale of the unexplained is taken from Norfolk News, 31st May 1902, and concerns an alleged haunting in King’s Lynn.  It caused such a stir that several hundred people were turning up every night, and staying through the night, but as the hauntings were confined to the inside of the house they were wasting their time.

The declaration that a house at Windsor Terrace, King’s Lynn, is under the disturbing influences of a visitor from the invisible world has provided the town with a small sensation. Attracted by the statements that the house had shown signs of being haunted large crowds of curious-minded folk gathered in the vicinity of the troubled habitation on Monday night, and again last night, but as could only have been expected, their vigil produced nothing of an exciting nature. The sensational manifestation has been reserved for those persons who have paid a visit to one of the bedrooms in the house, and a story of strange happenings is given.

It appears that a few days ago a Norwich family moved to Lynn and took occupation of the house in question. Their furniture followed, and the first night they slept in the house seems to have been a very unpleasant one, for during the night the occupants of the bed rushed terrified from the room, averring that a ghostly visitor had laid hold of the bedstead and given it good shaking. Since then watch parties have been organised, and they declared that if they never believed in ghosts before they believe in them now.  One individual, it is stated, was pitched neck and crop out of the room, and the bedstead has repeatedly given evidences of unearthly animation.  Strange noises have also been heard, and altogether the room is credited with containing all the elements a haunted chamber.

At all events the family have been genuinely alarmed, and have net dared pass the night in the house since its members were so rudely disturbed, and a kind neighbour has provided them with sleeping accommodation. They have taken another house, but intend to leave the animated bedstead behind. In the meantime it has been determined to continue the midnight watches in the hope “laying the ghost.”

If you found this interesting, please consider sharing on Facebook or Twitter, to help other people find and enjoy Windows into History. You can keep updated each time I post a new entry by clicking on the follow button on the right of the screen. I welcome any comments or suggestions, and will consider guest posts.

1 Response to The Moving Bedstead