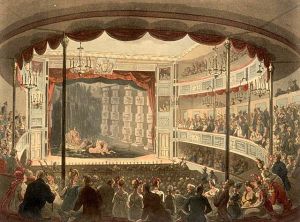 Quick Quotes 22. The following quote is taken from Memoirs of Joseph Shepherd Munden, a biography of a well-known actor during the late 18th and early 19th Centuries, famed for his comedy performances. His biography was written by his son Thomas.

The great butt of the actors was Mrs. Webb, a very fat woman, a contrast to Mrs. Mattocks, as she was as coarse and vulgar as the other was genteel. One sultry night, Mrs. Webb, sitting in the green room waiting to be called, had powdered her face profusely to allay the perspiration that flowed down her cheeks. This being observed, the call boy was bribed to wait till the last moment, when he rushed in and exclaimed, “Mrs. Webb, the stage waits for you.” “My God!” said Mrs. Webb; and forgetting altogether her dishabille, hastened, as fast as her corpulency would allow her, to present herself before the audience, who received her, in her mottled state, with shouts of laughter. Another time, standing by the side scenes, a string was fastened to her dress, which only allowed her to step in view of the audience, when her progress was suddenly arrested. J. Aikin was a very nervous man, and it was Munden’s amusement, when Aikin was engaged in the serious business of the stage, to catch his eye with an expression of countenance seeming to signify that his dress was disarranged, or that some other mishap had occurred, which kept poor Aikin in an agony of suspense until the scene was over.

“Quick Quotes” are some bonus content for the blog. Each time I find an interesting or amusing little quote from and old (verging on forgotten) book, that does not really need any further explanation or background information, it will appear on Windows into History under this heading. You can keep updated each time I post a new entry by clicking on the follow button on the right of the screen. I welcome any comments or suggestions, and will consider guest posts.