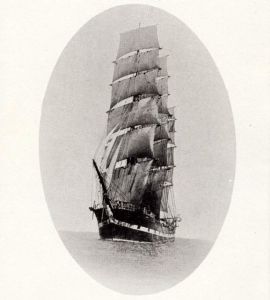 The modern traveller is used to eating recognisable and safe food wherever he or she visits in the world. Even in the less visited countries no one is surprised to find there is a McDonalds or similar fast food outlet to feed them from more or less the same menu as in any British or North American city. Likewise the traveller expects clean hot and cold water and at least basic toilet facilities. Not so for the traveller in late Victorian and Edwardian times. Then, you needed a pretty strong constitution and accepted what sustenance and limited comforts were available.

One great traveller was C.J. Cutcliffe Hyne (1865-1944) who claimed to have travelled 400,000 miles. He struggled as a writer for some time, writing mainly boys’ adventure books and a column of advice to young ladies under the name of “Aunt Ermyntrude” for a weekly magazine, until one of his Captain Kettle stories fired the public imagination and he made a good living for many years writing about the fiery sea captain. These yarns are very readable today as long as the reader overlooks the inherent racism that was current at the time the stories were written. One of Cutcliffe Hyne’s own sea voyages took him up the Amazon River:

He finds himself abusing his bathroom steward for putting a white potato soup into his morning tub in the place of the limpid blue Atlantic water through which he used to admire his limbs. “No-can-help, sir,” says the steward. “That’s Amazon water. The ship will be filling her tanks with it presently. You mustn’t worry about the colour. This is nothing to what you will get a thousand miles up. It is like muddy beer at Santander, and near Manáos, with the Rio Negro coming in like porter from the north, and the Madeira doing a line in yellow pipeclay from the other side, they do tell me the reason the Indians don’t bathe is because they are afraid of coming out piebald. If you’ll give me your sponge, sir, I’ll just wash it out with filtered water.”

Our trusted period book of advice for travellers in the wilder parts of the world The Frontiersman’s Pocket Book had a somewhat different idea for getting clean when water is only available for drinking use:

Failing water, run until you sweat, strip, and bathe in dry sand. This cleanses and refreshes the skin. A sponge makes a big bath with little water.

I cannot comment personally on the success or otherwise of the dry sand method. I doubt it would meet with the approval of anyone living near any sand pit where the method was attempted. A morning bath was not a normal event for another great traveller of the time, A. Basil Lubbock, who was known to his friends as “Klondike” due to his joining in the Great Gold Rush of 1898. In Lubbock’s most famous book Around the Horn Before the Mast, Lubbock told about what he had to eat and drink at times to keep body and soul together:

The worst coffee I ever drank I think was up in the Klondike…Bacon and beans were the staple fare, washed down by a drink supposed to be coffee, but generally called slumgullion…[It] almost formed a meal in itself, for half the cup was filled with a thick sediment of flour, sawdust, and one or two other delicacies. It tasted oily, and it tasted of garlic; this for coffee I thought hard to beat, but old Slush’s coffee on the ‘Royalshire’ ran it close.

There were two brands of coffee on the ‘Royalshire’ marked “cabin coffee” and “crew’s coffee”…The cabin coffee…[was] pronounced to be sweepings, the cheapest to be got in Frisco [San Francisco]. The crew’s coffee…was not coffee at all…all I know is there is a deal of painted wood doing duty for coffee in America.

If your digestion coped with slumgullion, the seafarer also had to cope with ships’ biscuits or “hard tack”. One of Lubbock’s shipmates had a recipe for making those biscuits more palatable.

As I sat sewing, Loring came up to me and proposed that we should make some dandyfunk for tea. I was always ready for anything in the eating line, and at once seconded the proposal; but what dandyfunk was I had no more idea than the man in the moon.

Loring asked him to make a canvas bag to “smash it up in.” What could be the dish that you had first to smash it up in a canvas bag? You are not going to make us a pudding out of brick-dust and oyster shells…are you? If so I am off. Loring replied that Lubbock would eat it quick enough when it was made and asked for an iron belaying pin. He filled the bag with ships’ biscuits and proceeded to beat it to dust inside the bag. Putting the dust on a large plate he added water to make a thick paste. To this he added molasses and the contents of one of the few pots of jam they had. When thoroughly mixed it was taken to the cook who put it in the oven.

At tea-time we were all curious to see the result of the dandyfunk. Loring went to the galley for it and brought it aft steaming hot, a mixture between a cake and a pudding. I thought it extremely good, and it had another excellent quality, it was extremely stodgy, and filled up the chinks splendidly.

Among the many countries visited by Cutcliffe Hyne was Lapland, who had pithy comments to make about the residents of most countries he visited, including the Laplander:

His life is made up of food (or lack of it), fur, flies, small-pox, fishing, and more flies, steam-baths, a harvest one year in three, and still more flies, combined with reindeer transport in the winter (when flies are not) and an annual burst in some available town…

Cutcliffe Hyne had a poor opinion of Lapland bread:

There are two main brands of Lappish bread, the rubber and the concrete. The rubber quality, in spite of a dental apparatus that has got round most things from Florida crocodile to Berber nineteen-year-old butter, frankly, beat me. No matter how hard or how long one chewed it, the beastly stuff always bobbed up serenely from below. The concrete variety, if placed in the mouth during the early hours of morning, could be bolted by a very hungry man about lunch time – especially if there was nothing else for lunch. I brought some of this rye-mixture bread home to England. My dog, who can eat most things, spent a morning over one segment and gave it up.

It can be of no surprise that both Cutcliffe Hyne and Basil Lubbock were members of the Legion of Frontiersmen and that Cutcliffe Hyne was one of many contributors to The Frontiersman’s Pocket Book. We will leave the final comment on food for adventurous travellers to some advice in that invaluable book:

The stones of a desert may hide eatable lizards and insects, the barnacles on a lost boat may contain a little meat. Useless looking plants may be the tops of ground vegetable. The rotting bark of trees conceals a meal of fat grubs.

I must finish now and make myself a mug of slumgullion and see how the dandyfunk is doing in the oven – or perhaps I will just go down to the nearest fast food outlet for a burger and french fries!